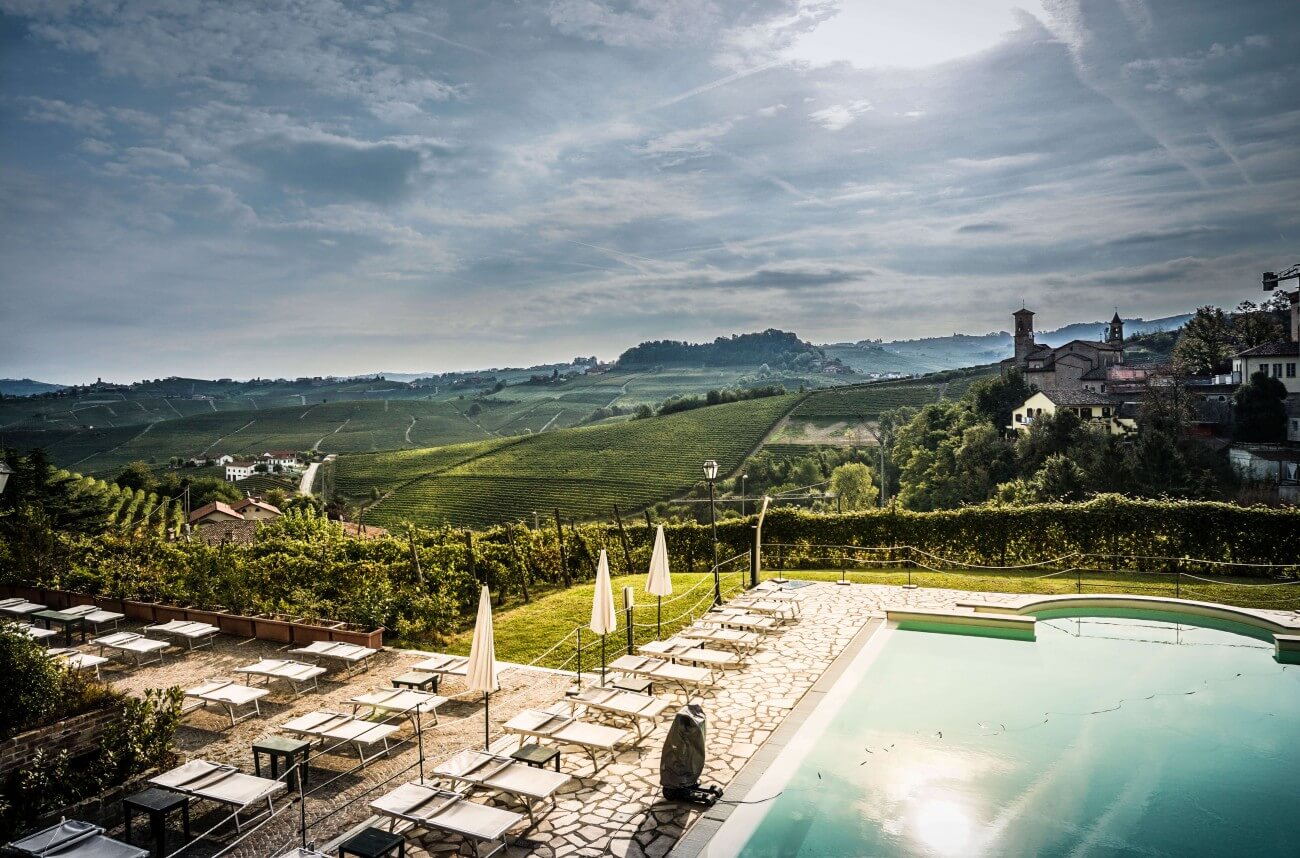 Sometimes, even in Barolo, you need a cold beer.

We were road-weary and a little bedraggled from winery tours and many kilometers of Piemontese highway, dragging our bags across her cobblestones.  I knew there was a problem by the way the lovely housekeeper was staring at us curiously, as if to ask silently, “where do you think you’re going with that luggage?”  As they say about the best-laid plans, something had gone awry.

Fall is such a beautiful time to be in Piemonte- truffles, harvest, crush, the SlowFood Cheese show in Bra- but all these things result in an impossible influx of visitors.  And no available hotel rooms.  After a few futile calls to local Alba hotels, we decided to try the Hotel Barolo.

The Hotel Barolo has to be one of the most beautiful little slices of the Langhe-  situated among Nebbiolo and Barbera vines, nestled inside Cannubi, walking distance from Bartolo Mascarello and  complete with a patio and pool area staring directly into the heart of the picturesque town of Barolo.  It was a very lucky turn of events to find there was indeed, room at the inn.  The hotel and its restaurant are attached to Brezza’s winery- we had to walk through the crush pad to retrieve our luggage form the car.  Nothing says “welcome to Barolo” like the scent of Barbera beginning to ferment on your way to your hotel room.

Exhausted and starving we decided to grab a quick dinner at the Hotel Barolo restaurant that night.  The Brezza family lives and works at the hotel and winery, so it was no surprise to find our sommelier and hostess that evening were both members of the family.  I am pretty sure (by the exceptional quality of the food) that somebody’s grandmother was also in the kitchen that night.

We decided to check out something a little older with dinner- there she was, a bottle of 1974 E. Pira Barolo just sitting there, preening in front of my eyes on the wine list, begging to be chosen. The wine cellar at the restaurant is both deep in older vintages, and super reasonably-priced.  I am not a big fan of decanting, even to remove sediment (I generally prefer to let the wine stand for a bit of the sediment can settle, then I pour gently from the bottle).  I would classify myself as a decanting-conservative, preferring also to let the wine breathe in the glass so I can witness and smell the evolution after it’s opened and poured.  However, our enthusiastic sommelier insisted he knew how to handle the bottle.  I admit I was skeptical.  I also admit I was wrong.

It was only after this semi-negotiated double-decant-strain-decant again process, we realized what a gem of a bottle we had stumbled upon.  The decanting and straining process did nothing to hide the deeply-rooted tannins- the addition of so much oxygen was exactly what this wine needed.  As our friend and expert told us “The wine has been trapped in the bottle for 40 years.  She needs to breathe!”  The aromatics were singing- everything they tell you about how great Nebbiolo can be was summed up in this bottle.  I just wanted to sit with the glass and smell it all night- roses and honeysuckle and cool mountain air on a damp forest floor.  Mushrooms- fresh porcini and something darker- more like dried shitake after being reconstituted- was the only hint at age aside from the color.

The wine started our a kind of burnished brick-red (classic older Barolo), but as it took air, the color actually improved, gathering some more violet reflections into a darker garnet in the glass.  Truly magical and a pleasure to experience as we sat on the patio with Grandma’s tajarin.

Coincidentally we also spotted Enzo Brezza, who had retired to the restaurant around midnight for a quick bite.  He was clearly exhausted form a long day working in the cellar, but he perked up when he saw the bottle we were discussing. Enzo joined us for a glass, and predictably we ended up finishing the Pira, a bottle of Brezza Chardonnay, and the bottle of 2003 Brezza Bricco Sarmassa Enzo insisted we try.  There was a lot of easy conversation, and a quiet contentment in the air.

I think I will always remember this night.  This was the first evening of the year the air began to hint at fall.  Nebbiolo would be picked the week after so the vines were still heavy with fruit.  The silhouette of the medieval town in the distance and the vineyards below us were sparkling and blue under the moonlight.  Enzo was relaxed and happy, with a bottle of German beer and a panino, secure in the knowledge that the Barbera and Dolcetto and all the whites were bubbling away below us.  Everything was quietly waiting, happy with the natural progression of things and the gradual transition to come.   Summer to Fall, Fall the Winter.  The vines ready to give up their pregnant burden, the winemakers ready to shepherd the next vintage home.

I floated away to bed that night thanks to the wine, the company, and the beautiful magic of Piemonte.