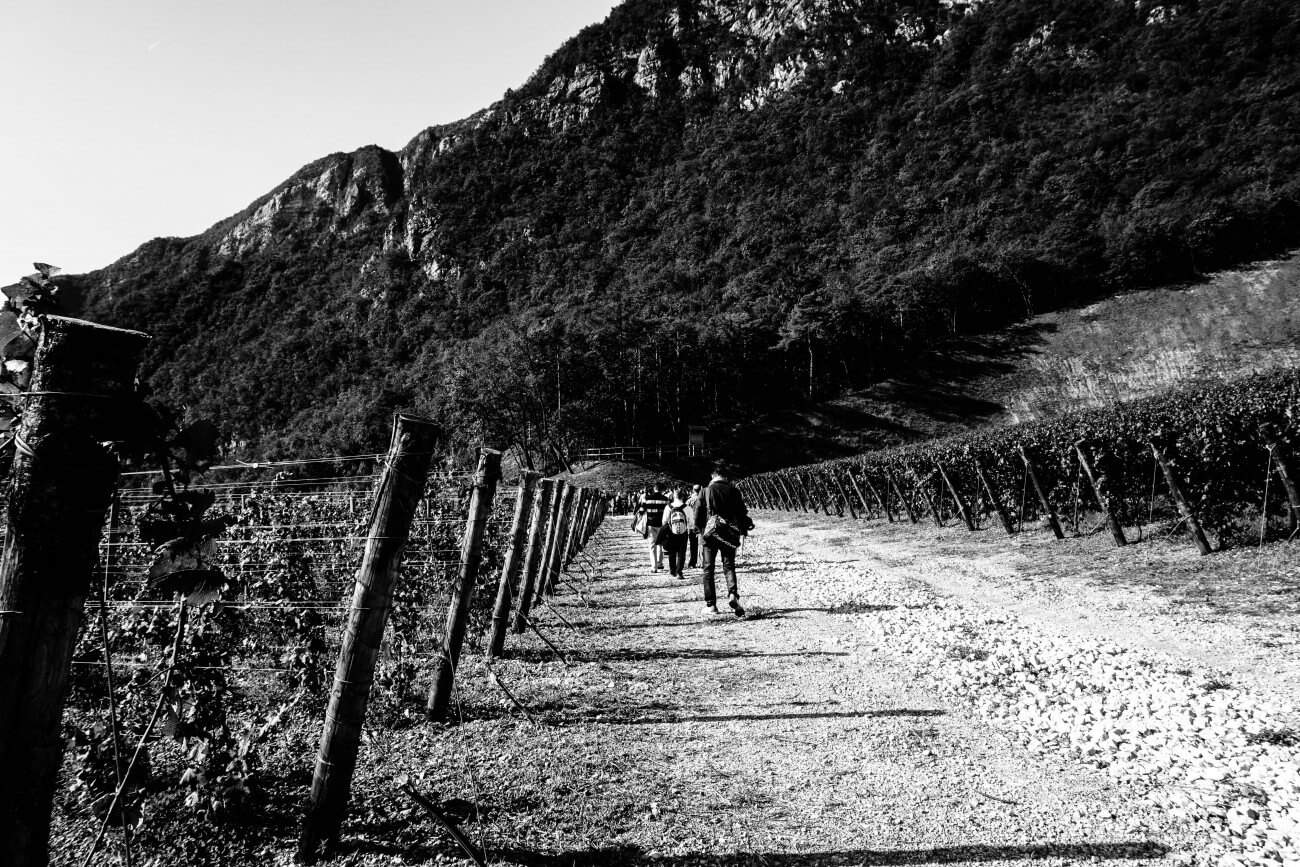 Once Upon a Time…

The story of Giulio Ferrari and his winery is a fantastic tale.  The kind of bedtime story you tell your children- the story of a dreamer, a man who sought perfection and beauty in the world.  Here is my version… La Fiabba di Giulio Ferrari.

A long time ago, in a far away place, a man named Giulio left on a journey from his home in Trento to visit Champagne. This was not an ordinary occurrence- in those days people didn’t just pack up and leave to visit other places.  But Giulio was different- he was curious and passionate about life- he wanted to meet new people and see the world.  Giulio was also accustomed to being a bit of an outsider- comfortable being a little different from everyone else.  As an Italian in an Austrian outpost he knew he stuck out- but he didn’t mind.  Even if his named seemed strange, and his accent may have been foriegn, he liked being special.  So he set out on his journey to France…

Giulio arrived in Champagne and was struck by the beauty of the place and its people.  He also found a different culture surrounding food, and especially wine.  Wine was more than just a beverage for sustenance- it was more than just fermented grape juice sold in bulk.  Here in Champagne, wine was a pursuit unto itself.  People happily discussed the merits of different growers and production houses with him.  The Champenoise talked about wine the way his Trento neighbors discussed cheeses and cured meats- wine was an artisanal product, worthy of serious consideration.

Consider it he did- Giulio found the wines of Champagne to be absolutely fascinating. The Champenoise had perfected a method of trapping the bubbles from fermentation inside the bottles!  Every bottle was a reason to celebrate. He asked himself, why was it that nobody made wines like this at home?  The Champagne Method was fascinating to him, with all of its precise and beautiful rhythms and ritual.  The riddling racks full of bottles slowly giving up their lees.  The explosive drama of dégorgement.  The many months of patience required before each bottle was ready to be enjoyed, after it had become integrated and softened by time.  Champagne was full of aromatics and flavors- preserved and heightened equally both by nature and nurture.  Every bottle was a work of art- Giulio’s obsession continued to grow.

As he looked around he began to see the connection between the steeply planted vineyards of Champagne and those of the Adige Valley.   Both places had their challenges- harsh cold winters, and shorter ripening period making true sugar maturity a challenge for vines.  He could literally taste the possibilities- sparkling wine production in Trentino!  The excitement running through his veins was like the Champagne bubbling on his palate.  He began to form a plan…

One moonless night Giulio Ferrari (our handsome Prince) carefully and quietly stole out of Champagne under cover of darkness, his wagon loaded with illicit cuttings of Chardonnay vines- the very first Chardonnay which would ever be planted in Italy.  Giulio slipped over the mountains and back to Trento, glowing with his plan, which he set in motion immediately upon his return.

In 1902 Giulio built a beautiful winery inside the main piazza of Trento where he could produce and age his sparkling wines.  Nobody understood why he would invest so much time and energy into something so ordinary, so banal, as fermented grapes. Giulio was accustomed to being misunderstood though, and continued on his way- he didn’t mind that people talked about him and wondered if he had lost his mind.  Giulio locked himself in the winery, furiously inventing tools and machines to help make his sparkling wines.  He frantically sourced the best fruit from the highest and most interesting vineyards.  He fell in love with the local terroir, more convinced everyday of its potential to unleash beautiful and world-class wines inside the bottle.

As with all good stories, our hero encountered many obstacles on his quest to greatness.  In 1914 the terror of World War I shook the city of Trento.  For years the allies bombed the city to make sure the Germans were not able to advance over the mountains.  This forced Giulio and his countrymen into hiding.  They ran for the hills, eventually finding safety in the mountains.  When Giulio was able to return to Trento, he found his beloved city destroyed.  The rubble was astounding.  Imagine the joy that must have flooded him when he turned the corner to see that in the middle of the wreckage, his precious winery stood all but entirely untouched! He threw open the doors and found, to his complete disbelief, the wines were resting peacefully.  They had waited in the cellar like Sleeping Beauty, oblivious to the chaos and destruction outside the doors.

However our hero’s story had only just begun.  Remember at this point the wines he had tasted and studied in Champagne may have only spent 2-3 years resting on their lees before disgorging.  At this point some of these bottles had been ageing for over 7 years!  He had no idea what would happen to them, or if they would survive.  What pure elation when Giulio must have felt when the liquid from these long-ageing bottles first touched his palate.  Imagine the satisfaction of tasting those creamy, luscious bubbles, framed by Trentino’s terroir.  Acidity, lightness, depth and full of the taste of victory.

Giulio and his winery thrived, even as he had a lot of work to do in convincing the local people of these wines and their value.  These were among the first local wines bottled individually, and not served as vino sfuso, from a tap.  They were (by current standards) expensive.  They were different. This did not deter our hero- Giulio and his wines continued to improve and thrive- even through another World War.

Among the many merchants to whom Giulio now supplied his wines, one in particular became his friend- Bruno Lunelli.  Bruno admired the journey Giulio had taken to reach his goals and realize his dreams.  He was also a self-made man, a local merchant who worked hard to support his family.  He would often sit with Giulio and discuss the future of both their businesses.  Many nights the conversation turned to Giulio’s thriving winery- he had nobody to whom he could leave his business, and consequently there were many offers made by local merchants to purchase Ferrari.  He rejected them all, knowing he could not trust them to continue his life’s pursuit of uncompromising quality.  Quite simply they were all too practical- too pragmatic. He could not see the magic in them- the imagination it would take to craft superior wines at any cost.

In the end Giulio could envision only one option for the future of Ferrari winery- he wanted he friend Bruno to take over his legacy.  Bruno Lunelli was the only man who truly understood him.  How many glasses of wine had they enjoyed together, ruminating over the beauty of art in the bottle?  How many discussions had they enjoyed about the kind of grit and determination it takes to build something from nothing?  Bruno understood him, and even more importantly, Bruno understood his wines.

After many serious discussions and a promise to stay and teach the particular of the winemaking process, Bruno agreed to purchase the operation from Giulio.  This was no small decision, from any perspective.  Bruno pieced together various lines of credit and funds to afford the winery, while Giulio allowed him to pay in installments.  He stayed to teach Bruno all of his secrets- how to work in the winery and in the vineyards.  How to understand the wines.  Together they planned to protect and grow the legacy of Ferrari.

In the end, Giulio Ferrari, our handsome Prince, died content with the knowledge that his life’s pursuit would endure, but more importantly he was happy knowing the wines would continue to tell their story for themselves.

Today the Giulio Ferrari Riserva del Fondatore produced by the Lunelli family is still made in homage to Giulio.  Every bottle spends at least 10 years on the lees before it is released.  These are elegant wines, aromatic works of art that recall the wet earth between the vineyards, high in the Dolomites above the city of Trento.  The Giulio Ferrari bottling is classic long-lees-aged Chardonnay that also offers honeyed notes, citrus, beeswax and spice. Each bottle is a piece of history, an enduring fairy-tale in itself.